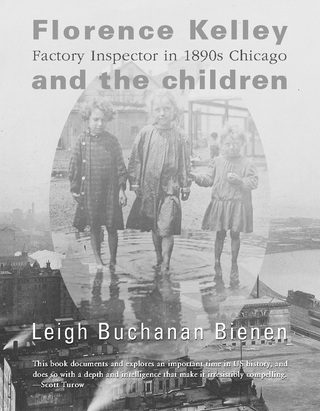 Florence Kelley, a lifelong advocate for women and children, came to Chicago with her three children fleeing an abusive husband. She lived at Hull-House in the 1890s and was appointed state factory inspector by Governor John Peter Altgeld, becoming the first woman to hold that post in the United States. As factory inspector she and her colleagues worked to place children in school and remove them from tenement factories and dangerous industrial environments. With colleagues she conducted a wage and ethnicity census of the slums of Chicago at the time of the World’s Fair, resulting in the publication of Hull-House Maps and Papers (1895). Its findings and astute observations are relevant today. This book braids together three narratives: the story of Florence Kelley’s life as a mother and reformer in the tumult of 1890s Chicago; the story of the author’s arrival in Chicago a century later and her new life and work here; and references to wrongful convictions and exonerations over the course of a decade leading finally to the abolition of capital punishment in Illinois.

“This book documents and explores an important time in US history, and does so with a depth and intelligence that make it irresistibly compelling.”
—Scott Turow, author, Presumed Innocent

“Florence Kelley is a forgotten American hero. Independent-minded and tough, Kelley at the turn of the last century led the fight for a minimum wage and decent working conditions, especially for women and children. In these pages, Leigh Bienen offers a worthy tribute to Kelley and draws intriguing parallels to the struggles of today.”
—Alex Kotlowitz, author, There Are No Children Here

“In Florence Kelley, Factory Inspector in 1890s Chicago, and the Children, Leigh Buchanan Bienen has written an audaciously original hybrid fashioned from parallel narratives, from public records and private diaries, from history and memoir. The book remains scrupulously rooted in historical fact even as it explores the subjective fluidity between past and present."
—Stuart Dybek, author, The Coast of Chicago

“Too few people know what a huge place Florence Kelley holds in labor history, but in addition to setting out her record, Leigh Bienen gives us added perspective on her heroic accomplishments: through her own journal entries she draws out parallels—similarities and contrasts—that make us question what has changed and what has, lamentably, stayed the same in more than a century of legal, economic, and personal drama. This is a fascinating book, abundant, useful and important.”
—Rosellen Brown, novelist, author of Before and After and Tender Mercies


Excerpt
In 1998 when I had been teaching law for several years, I came across a set of original handwritten police records of homicide cases in Chicago from 1870-1930. This data set led me to an extraordinary set of archives, legal records, documents and photographs.

Eventually, the homicide web site was launched with an interactive search engine which provided access to the 14,000 case records and to hundreds of contemporaneous photographs and thousands of pages of documents and commentary.(homicide.northwestern.edu).

The Chicago Historical Homicide web site attracted more than 77,000 visitors on the day of its launch, June 7, 2004. As of 2014 more than a million people have come to this web site.

The wealth of historical records and archival materials from the period of the homicide project led to another web based collaborative, educational enterprise: The Florence Kelley Project. The Florence Kelley web site was launched in 2008, making available thousands more pages of court records, photographs, letters, documents, books and commentary. (FlorenceKelley.northwestern.edu).

Still, a book about Florence Kelley and her time in Chicago was necessary, although there were already three excellent, very different biographies of her, and she had written her own Autobiography. There was much more to be found out about her time in Chicago at Hull House and her life and accomplishments as the first statewide factory inspector in the country.

Florence Kelley’s official authority came from the Illinois Factory and Workshop Inspection statute enacted in 1893. Her personal authority, and the role she played were unique. The political opposition to the efforts of the factory inspectors was also formidable. The opposition to government regulation and inspection of factories in the tenements did not go away quietly. Those interests fought the implementation of the statute with all their considerable political and economic resources.

As excellent as the other sources were none, in my opinion, conveyed the richness of the historical context for the effort to reform the conditions in the sweatshops. There remained the ever present mystery of the interplay between the individual personalities of public figures, such as Florence Kelley and Jane Addams, their role in historic events, and the role of chance, circumstance, and unpredictable externalities, such as the enormously popular World’s Fair, the shocking Pullman Strike, the massive unregulated immigration to Chicago, the great depression of 1893, and the strong labor movement and its determined political opposition. A different time, a different place, different people and nothing would have happened in quite the same way. In other words, 1890s Chicago was just like the present.

A unique array of energetic and talented individuals who, along with Florence Kelley, were in Chicago in the 1890’s played important roles in the Herculean efforts to clean up the sweatshops — Henry Demarest Lloyd, Jane Addams, Mrs. Thomas Morgan, Carroll Wright, Abraham Bisno, and Florence Kelley. They persistently fought for legal change against opposition and all the odds against them. I came to recognize Florence Kelley’s handwriting in the archives, and that of her mother, sons, and father and brother.

The more I read about what Florence Kelley and the others said about themselves, the more I wanted to know about their families and their lives. And the law and the newspapers and the public records were where their stories were to be found. And so this project evolved to include their words, as well as my own. And the book came to be about social and political change brought about through law.

These 1890’s people were crusaders, reformers, lawyers. They were like us, and not like us. They wanted justice, and to do good. Or, they wanted things to stay the same and to hang on to what they had. Many were inspiring writers and thinkers. They fought for a new and better society. There seemed to be no public issue they hadn’t considered and discussed, often with a degree of sophistication and depth beyond what can be found in our present public discourse. And so the subject of the book kept shifting. What would Florence Kelley and her intelligent, articulate companions have said about our world? Could they have kept steady their moral compass?

We are all living in the middle of another extraordinary time, another revolutionary time. In Chicago we are once again in the middle of it: the steamy politics, the torrent of unresolved economic issues; unprecedented international challenges; a contradictory political situation and some anarchy; all of it inescapably steeped in the law. The more I watched what was happening from 1995 to 2013, the more it started to look like America in the 1890s.

In Chicago, politics remains our principal preoccupation, entertainment, and the scourge of our struggle to create a responsible, accountable civil society. Remarkable people walk on stage, disappear into the wings, and what happened when and where and to whom, becomes a matter of dispute, sometimes in the courts. Public officials come and go, and some end up in prison. And so it was in the 1890’s. The hands on the levers of power may have changed, but many patterns and synchronicities remain.

There has indeed been a revolution, and it has changed our world, most notably but not only in our employment. It wasn’t the revolution Florence Kelley and her colleagues kept talking about, waiting for, and writing about. They could not have envisioned every office and factory being filled with people staring into computer screens. Many are left out, many have had their expectations upended, and some few have been richly rewarded.

Now, as in Florence Kelley’s time, all questions, big and small, are on the national agenda. And all of us—parents, children, grandparents, lawyers, government officials, teachers—try to leave things a little better and to make sense of our world, our lives, our work. Yet we can do no more than extrapolate from our experience, just like the 1890s reformers.

The law continues to be primary, portentous, pretentious, stubborn, often wrong, too frequently plagued by corruption and conflict of interest. Waste and fraud in government are tolerated and perpetuated by our own inertia, incompetence and fear.

Yet the law for all its faults is all we have and within the institutional structures of the law, important changes do sometimes happen. A factory inspection law is passed, and some change takes place. A series of wrongful capital convictions is uncovered, and eventually the death penalty in Illinois is abolished.

And, life goes on, for the lawyers, for the reformers, for those who oppose the reforms, for the teachers and students, and for everyone else. Those who can read and write, have shelter and access to food and water, and the possibility of employment, and live in a stable political environment are the lucky ones, and the few. If the law, or the illusion of the rule of law, can create the structure for a stable civil society, it does its most important job. And so this book became about Florence Kelley and her work as Factory Inspector, and about legal reform now. The obstacles presented by the political realities of our time don’t look much different than those faced by those remarkable advocates for legal reform in the 1890s, Florence Kelley and her colleagues at Hull-House.